If you have student loan debt and are making the minimum monthly payments, you may have considered paying off student loans early by making even more payments each month. In fact, doing so is part of the strategy we recommend for people who are pursuing the best way to pay off student loans. There seem to be some “mixed reviews,” however, about this topic as many people disagree.

Let’s take a look at an example of how much can be saved by paying off student loans early: 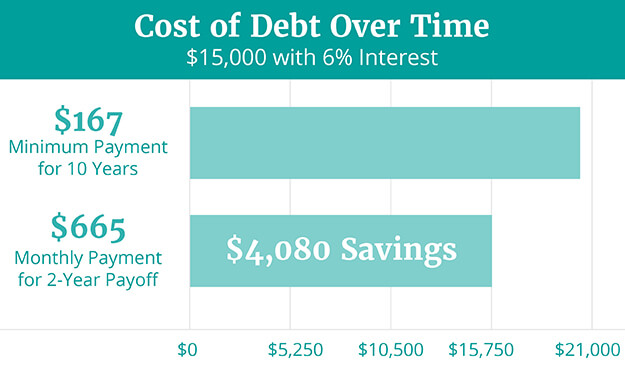 The interest rate in this example is 6%, slightly less than the Stafford rate of 6.8%. As you can see, a two-year repayment saved $4,080. Of course, the borrower was making a hefty monthly payment of $665. This won’t be possible for everyone.

So let’s consider a more reasonable example: If a borrower could make a monthly payment of $289.99, the debt would be gone in five years. This isn’t quite as extreme as a two-year payoff but still allows the borrower to “get ahead.”

Don’t think this is possible for you? Look for ways to save money on groceries, going out to eat, housing, entertainment, and transportation costs. You might be surprised to see how much extra money you could put toward your student loans.

The second primary benefit of paying off student loans early is that it creates stability. Having a job is a great thing in today’s economy, but with uncertainty ahead, consumers should not take their employment and income for granted. It could be financially foolish to only make your minimum student loans payments because you assume you will keep your job.

A better strategy would be to prepare for unemployment in order to protect yourself. Do this with an emergency fund, as Jerry Cruthis explains:

Once you have established your emergency fund, there is really no reason not to start paying off student loans early. That’s because you already have a cushion that will keep you covered if you were to lose your job or experience another unforeseen expense.

Paying Off Student Loans Early is a Counter-Cultural Decision

Let’s face it, many people out there don’t even have the option of paying off student loans early due to poor job prospects or other types of debt. If you are able to even consider this as an option, you are pretty lucky.

The problem is, most people in this position don’t realize how lucky they are! They don’t see the real opportunity that has presented itself. In essence, paying off student loans early is a counter-cultural decision, because very few people are doing it or encouraging it!

If you are able, we challenge you to pay off your student loans as soon as you can. Of course, saving for retirement along the way is a good idea, and you’re going to want to establish a solid emergency fund. But in the end, paying off student loans early will save you in interest and put you on solid financial ground, regardless of your employment situation. It may even open up new opportunities for you, since you won’t be burdened by the debt. In a few years, you might look back and be very happy with your decision to pay off the debt early.

What are your thoughts about paying off student loans early? Let us know in the comments below.

A counselor can explain which options are right for you and make other personalized suggestions for your finances.

98 responses to “Paying off Student Loans Early: A Good Idea?”