Did you know that sometimes medical bills don’t have a due date? It seems hard to believe that such a basic but important piece of information could be left off of a bill, but it happens. I know because I recently received a bill from a leading laboratory company after some routine blood work, and there was no due date to be found. To be clear, this was a “bill” that came after the EOB and other paperwork from my doctor and insurance company. While my initial response was one of excitement—“Hey maybe I just pay whenever I want”—it turned out to be a close call for my credit. I want to help clarify what the expectations are and what you need to do in this situation to avoid penalty or any damage to your credit.

When I first received the bill, I was a little surprised by the total (my doctor had not led me to believe that the bill would be so expensive) and I was still figuring out the details with my insurance company. They had already sent me a letter that detailed how much they would cover, but I was petitioning them to cover more. Thankfully, the bill from the lab didn’t have a due date. All it said was “Please remit prompt payment.” That’s pretty vague. So I thought to myself, “Great, I have some time to figure things out before this is due.” As it turns out, I was wrong and the lab was ready for its money.

In just a few weeks I received another bill, except this one had “PAST DUE” in big letters across the middle. I panicked, and was worried that my credit might have been impacted. But you know what—there was no due date printed on this new bill either. Although, I must admit the language was a little stronger. This time it said, “Payment is due in full upon receipt of this bill.” The bill looked like this, but imagine “PAST DUE” across the middle: 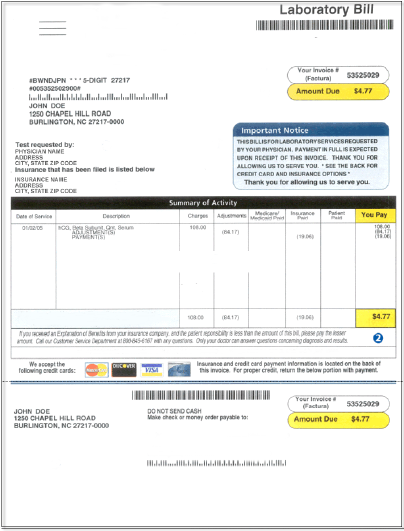 I called the lab company’s billing department to ask if they had reported my missed payment to the credit bureaus. They said “no” and that they only do this after seven missed payments. Seven missed payments? That seems arbitrary, and they still failed to give a reasonable explanation as for why the bill had no due date. Was it a comforting gesture, so that I wouldn’t feel pressured to pay? Was it to allow time for any additional arrangements I might make with my insurance? Or was it an intimidation tactic?

I didn’t know the answer to this right away, but it was obvious that there was a lack of communication and an element of deceit. How can a company mail a bill to a consumer without a due date and then tell the consumer they are late? It doesn’t seem right, does it? And without question, it’s a misleading tactic. In my situation, I was lucky that I figured out what was going on before things got out of control. I finalized arrangements with my insurance and paid the bill.

Although I had been told that it would take seven missed payments for my status to be reported to the bureaus, I kept researching. I wanted to know more about this process and how the timeline really worked. I also wanted continue my effort to determine how much of this might be intimidation or deceit on behalf of the lab. So I went to their website to find out more. Here is where I found even more conflicting information. I found this collections letter, which the company says gets sent to consumers after two notices regarding their bill: 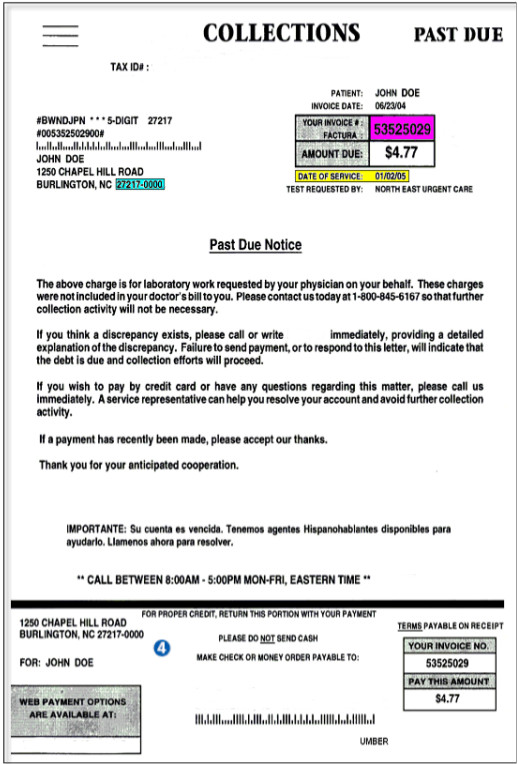 So let’s review the timeline—bill with no due date, then a past due notice about 30 days later, then a letter from collections after 60 days. That is fast-moving and, again, seems to be unfair to the consumer. Now, this collections agency is internal so that is a sign of relief, but it still seems over-the-top.

Why is this happening?

I think what’s happening here is that the medical industry is in a position where it anticipates that consumers won’t pay their bills, and it hopes that it can increase its chances of receiving payment by resorting to tactics like this. In my case, this led to panic, confusion, and frustration at the feeling that I was being duped by the company. Call me old-fashioned, but if there’s no due date then how do I know when the bill is due? Call me old-fashioned again, but if I get a letter that says “Past Due,” I’m going to become really upset and immediately worry about my credit rating. Thankfully, I caught it in time and had the savings to pay the cost.

On the other hand, I worry about those consumers who are struggling month to month and can’t afford these bills. Or, the consumers who are financially stable but just can’t afford an astronomically expensive and unexpected bill. I can only imagine how they might respond. I bet some aren’t able to pay and are content to let the account go to collections. But I also bet some of them panic, like I did, and resort to a credit card to foot the bill.

If you get a bill without a due date, assume that it is due within 30 days of the date it was sent. Then, call the company to make sure this is accurate, and go ahead and ask them specifically when they report late payments to the credit bureaus. The lab I was working with reports to the credit bureaus after seven payment notices, which should work out to be seven months or around 210 days. But other companies may do it differently. Regardless, the rule of thumb is that unpaid medical debt will be reported to the credit bureaus when it is charged off. This is when the original creditor sends the account to third-party collections. At this point, consumers have 30 days to resolve the debt or it will likely end up becoming a seven-year blemish on a credit report.

One other important thing to note—communicate with your insurance company actively during this time. Part of my dilemma was that I wasn’t going to pay a bill in full while I was still hoping that my insurance would review the expense and make further adjustments. If you are in a similar situation, you need to stay in close contact with the insurer and let the billing company know that you are waiting on this.

Personally, I think it’s crazy that I received a bill without a clear due date. And quite frankly, I still have my concerns about the company’s intentions in failing to provide this information. What I do know, however, is that my credit rating is my responsibility. It would have been a real shame to have it negatively affected by my failure to be proactive. So whenever you receive a bill with no due date or see some other sort of payment discrepancy—be proactive and communicate with all parties involved.

Want Help with Your Credit?

If your credit report is affected by a missed payment, or if you’re just looking to improve your credit worthiness and overall financial situation, we can help! Our counselors can provide you with a free credit score and review your credit report–all for free! On top of this, you can get an analysis of your budget and make a plan for your high-interest debt. What are you waiting for? Learn more about our budget and credit counseling.

7 responses to “Medical Bills without a Due Date – When should You Pay?”