It’s not always easy to financially plan for a major emergency, which is why so many people incur medical debt. And taking too long to pay that debt can have a big impact on your credit.

Medical debt is a little trickier than regular debt, and for that reason, it has become an issue for consumers. Doctors, hospitals, and other medical facilities don’t report debt directly to the credit bureaus. Instead, they send unpaid debt to collection agencies, and these collection agencies report the debt themselves. Obviously, this can be an unpleasant surprise. But the good news is that this problematic process might be changing.

You Now Have a Six-Month Waiting Period

Today, the law gives people with medical bills a lot more time to look over bills, negotiate with health-care providers, see what insurers will pay, or set up a payment program. It’s simply much more fair and friendly for consumers.

“Medical bills used to be treated the same way as any other unsecured debt, like credit cards. You were late, it got reported to credit agencies and showed up on your credit report,” says Bev O’Shea, a consumer credit expert at NerdWallet. “Today, the law gives people with medical bills a lot more time to look over bills, negotiate with health-care providers, see what insurers will pay, or set up a payment program. It’s simply much more fair and friendly for consumers.”

Last year, the three major credit bureaus–Experian, Equifax and TransUnion–also instituted a change that requires a 180-day waiting period before medical debt gets added to consumer credit reports. This is an important change, because medical billing companies have a habit of just sending bills directly to collections, sometimes even before consumers have a chance to review them. With the new rules, you’ll have about six months to make payments or make arrangements with your insurance carrier. 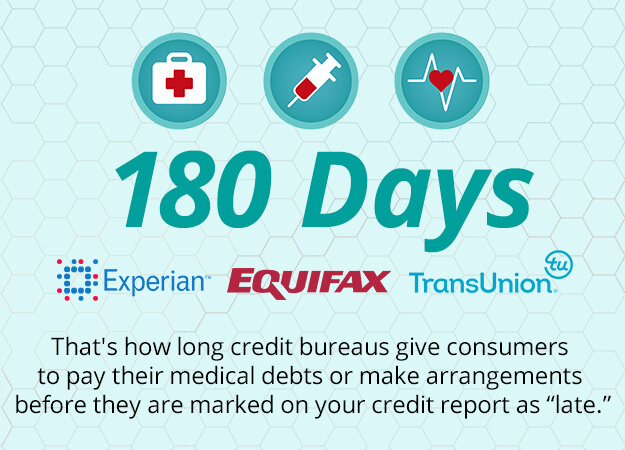 If you’re having trouble making payments during that time, the best course of action is to talk to the creditor or collection agency directly. Most of them are willing to work out some kind of repayment schedule or medical bill assistance program. To learn more, here’s an important guide from Clearpoint that discusses how to negotiate medical debt. It’s easier than you might think.

“[The new rule] is huge for consumers, because reported late payments can weigh down credit scores,” O’Shea says. “But the rules are not retroactive. If you already have medical debt or damage from it, the new rules for reporting it won’t help you with past debt.”

This particular change may not be much help to those who have already incurred debt. However, credit scoring firm FICO has created a new scoring model to address this problem, too.

Medical Bills in Collections Disappear When Paid in Full

Not long ago, FICO introduced a new scoring model, FICO® Score 9, that included significant changes to the way medical debt is factored into calculations. Now, when you pay your medical bill in full, it won’t show up on your credit report at all. So paying your medical bill–even after it’s sent to collections–ensures it won’t be included on your credit report, according to FICO. They explain:

If you can’t afford your bill, even after the six-month waiting period, you might try negotiating. Some consumers have luck haggling their medical bills with the original creditor or the collections agency. If you agree on a new amount, make sure to get the details in writing. O’Shea says that medical debts that are satisfied, whether they were settled or repaid, are disregarded by the new scoring model. This is much different than the reporting rules for non-medical debt that you settle.

She adds that, overall, these changes are positive, but the system still isn’t perfect. For example, there’s no guarantee that the three major credit bureaus will use the new formula, and O’Shea says FICO 8 is more widespread.

“So it’s crucial to check your explanation of benefits carefully and to make sure you actually receive bills that correspond with the information you see there,” she says. “It’s smart, and easy, to find out what’s in your credit report. And it’s worth checking in to keep your credit healthy.”

O’Shea adds: “A surprising number of consumers find surprises, such as an unpaid collections account, they knew nothing about.” As we’ve pointed out before, you can (and should) access a free copy of your credit report from each of the three bureaus every year through the FTC-backed website www.annualcreditreport.com. It’s always worth looking and double checking.