National Consumer Protection Week, March 1-7, is an important time for American Consumers. The last year has brought about many high profile identity theft cases, along with new strings of scams targeting the vulnerable. And, we are in the midst of tax season, a period of spikes in scam activity each year. These issues need increased awareness, which is why this week has been coordinated by a multitude of consumer watchdog groups from across the country. In honor of this week, and to help you be better prepared against scams and fraud, we will cover the FTC’s latest list of consumer complaint categories, along with guidance for how to handle some of these financially dangerous situations.

Below is an image taken from the FTC’s Sentinel Network Data Book, showing a breakdown of complaints they received in 2014. We will be focusing on the top three complaint categories: Identity Theft, Debt Collection and Impostor Scams. 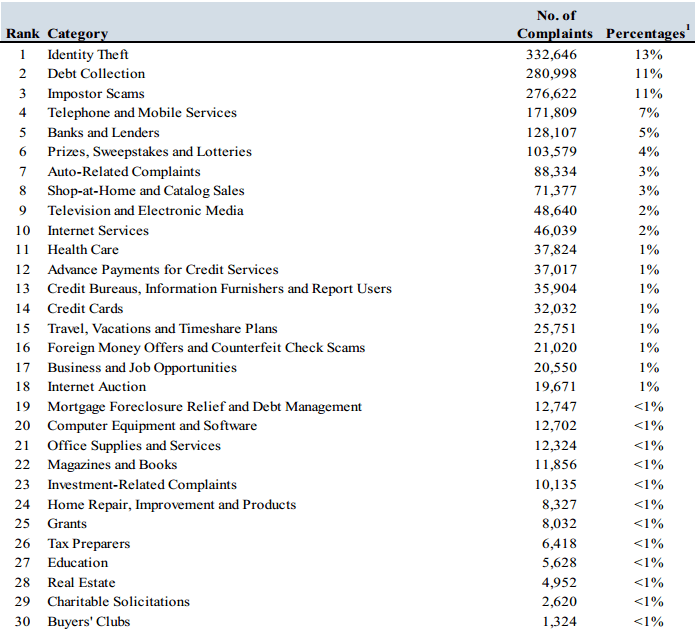 2014 marks the 15th consecutive year that identity theft has been the top consumer complaint reported to the FTC. It’s no surprise, after all the cyber security issues that we watched unfold over the last year. What’s interesting is the breakdown of identity theft cases that the FTC reported. According to their report, the identity theft breakdown was as follows:

It’s alarming to see how commonplace identity theft has become, but what’s more important is that you know how to respond if you do become a victim. According to the FTC, only 32 percent of people affected by identity theft contact law enforcement. That number is too low. Here are the steps you should take as soon as you believe you are a victim of identity theft:

The FTC has a portion of its site to help with these steps, specifically.

Debt collection accounted for 11 percent of consumer complaints. The majority of debt collection complaints were in reference to third party collectors, as opposed to the original creditor’s collection department. This is a perennial concern for consumers, as debt collectors use intimidating tactics, pursue old debts that are beyond the statute of limitations and use other deceitful tactics.

Consumers who are being contacted by a collector need to know their basic rights. The Fair Debt Collection Practices Act, gives consumers the following protections (among others):

There are also regulations that say collectors must:

Complaints about impostor scams have skyrocketed over the last year. In the FTC’s 2013 report, these only accounted for six percent of all complaints, and totaled 121,720. This year, there were a total of 276,622 impostor scam complaints. The majority of the complaints fall under the category of government impostors, followed by business impostors, and then a big drop off to family and friend impostors and romance scams, respectively.

The first thing you need to do is familiarize yourself with the types of scams, what they include, and how they differ. The FTC’s website is an invaluable resource for this.

According to the FTC, common government impostor scams include:

To beat these scams, follow the FTC’s advice and don’t wire money, pay for a prize, give the caller your financial information, or trust a name or number. Instead, get on the Do Not Call Registry, report the scam at ftc.gov/complaint, and remember that most government requests will come via physical mail and that you will never be asked to wire money.

Consumers should also be wary of the other types of scams the FTC mentioned. Ensure that business do the work promised, and always be cautious when asked to wire money. Also, be sure to verify any communication you receive from friends or family asking for money. You don’t want to give payment or payment information without ensuring that it goes to the intended person. As for the last impostor type mentioned, romance impostors, read this great article from the BBB.

Hopefully this information has been a good reminder of how important consumer protection is, and hopefully you are better prepared for and aware of the scams that are circulating today. If you need more help with these concerns, or would like to take a deeper look at your credit and overall financial health, we hope you will consider our free budget and credit counseling service.

Want Help with Your Credit?

A free budget and credit counseling session could be the answer.