As the amount of student loan debt continues to break records, people are seeking new ways to escape the burden of repayment. According to FinAid, the national total for student loan debt is growing at a rate of $2,853.88 per second! While there are a few practical solutions for those facing economic hardships, one option is extremely risky and could lead the debtor deeper in debt and into serious legal trouble. The “strategy” we are referring to here is putting student loans on credit cards. While there are a couple different methods and “goals” for this strategy, we believe they are all bad ideas. Let’s discuss why.

Ok, let’s just take a quick look at average interest rates for student loans and credit cards. If you are going to move your loans to a credit card, it would make sense to get a lower interest rate, right? But here’s the reality:

For federal loans taken out since July 1, 2013 the following interest rates apply:

What about credit card interest rates? Here are the averages according to Bankrate as of October 16, 2013:

As you can see, moving student loans to credit cards leads to paying a lot more interest.

Wait, 0% interest! Is this really happening?

Ah, here is the x-factor; here is the “catch,” the gimmick that makes this whole scenario possible. Credit cards sometimes offer what’s called an “introductory rate” of 0%, meaning consumers don’t pay interest during this time. The period typically lasts between six and 24 months. So while the credit card rate is normally much higher than the student loan rate, it’s lower during this period. Of course, the catch is that once this period expires, the balance on the card(s) will be subject to the high interest rate.

Considering the average student loan debt is around $26,000, this does not seem like a reasonable option. In most cases, consumers will not be able to put that level of debt on a credit card and pay it off within a year or so. Perhaps some consumers would be able to find a way around this as well by using this strategy multiple times with multiple cards that offer an introductory rate. But, this is still risky and would involve opening numerous credit cards unnecessarily, likely damaging your credit score. A better option might be to read our guide on the best way to pay off student loans. If you’re still struggling, check out some of the additional options at the bottom of this post.

Most student loan servicers do not accept payment in the form of a credit card. This means that your best bet for using this method involves either balance transfer checks or cash advances. The problem is that both of these methods involve fees that make it less appealing from the very beginning. If you are paying between three percent and five percent in fees to save on a loan that has an interest rate of six percent, the savings will be marginal.

So far, we have established that putting student loans on a credit card can hurt a credit score and lead to high interest after the introductory period, but there’s one more disadvantage. The most important reason consumers should not choose this option is that it strips away the benefits of their federal loans. This strategy removes the safety net that comes standard with federal loans. Flexible repayment programs and plans that make accommodations for low income-earners are just some of the benefits of federal loans. These programs help struggling consumers, and this type of assistance is not typical available from credit card companies.

Let’s be honest, as much as we hate to admit it, consolidating student loans onto a credit card can work. It is possible and could save you money. But the chances of success are low and the risks are high. Unemployment, an injury or illness in the family, and other unforeseen circumstances could easily put a dent in this plan. While it is theoretically possible to save money with this consolidation technique, it just isn’t worth the risks.

Ok, so hopefully we have convinced you that putting student loans onto a credit card is a bad idea. But for some, this isn’t the end goal. What’s the end goal you ask? Bankruptcy. Wait, what? You are surprised that bankruptcy would ever be someone’s goal? You thought bankruptcy was to be avoided at all costs…?

The idea behind this strategy stems from the fact that student loans typically are not discharged in bankruptcy. Sure, it happens, but it’s extremely rare. Credit cards on the other hand, that’s the kind of thing that gets discharged all the time. So the idea is to move the loans to credit cards where you can make them disappear. While it sounds like a creative workaround, it’s a bad idea. For several reasons.

Student loan debt is still exempt from bankruptcy even when it is reorganized or refinanced through other forms of credit. That leaves the debtor with the obligation to repay the balances and with the higher interest rates that are likely to come with them. Oh, and there is also the possibility of being hit with legal charges if the court believes that there was intent to defraud the lender. To make matters even worse, you’ll still be responsible for repaying the balance even if you go to jail! There’s more…

The Effect on Your Credit Score

Pursuing bankruptcy intentionally is like driving your credit score off a cliff. Opening multiple credit accounts for this purpose will hurt your credit, and bankruptcy will have an even bigger impact. The lasting effects of this are costly too, as future loans will become much more expensive due to the increased risk you pose to lenders.

Take a look at how the various strategies discussed here can affect credit. 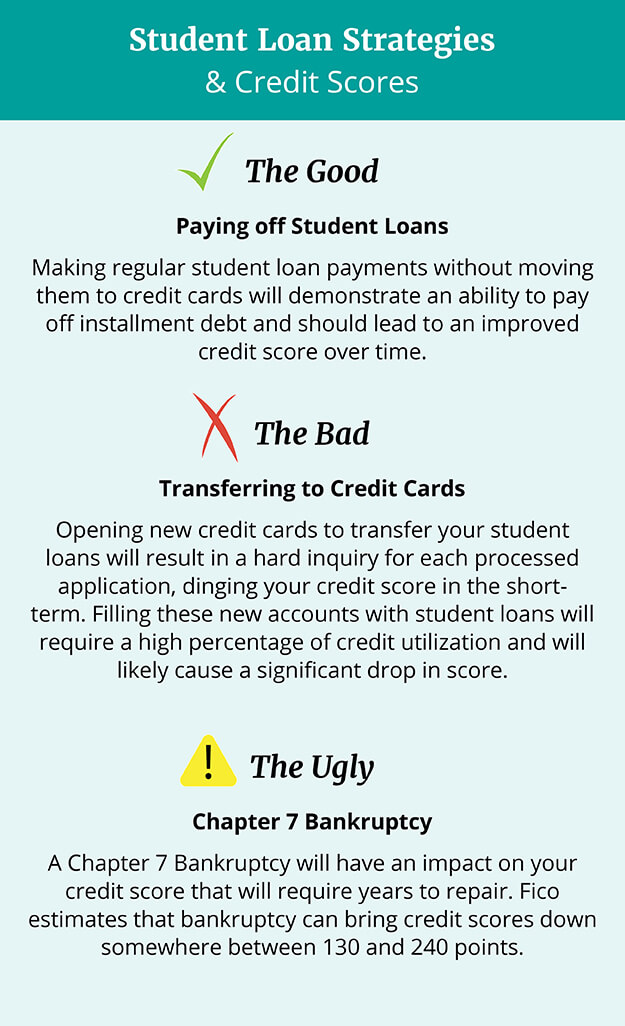 Purposely rearranging your student loans in this way with the end goal of discharge via bankruptcy is considered fraud and can land you in prison. But in order to be charged for this type of fraud, the credit card company would have to realize what’s going on and take legal action (it might surprise you to find out that they don’t always catch this) and they would have to be able to prove intent. In other words, if you genuinely thought that moving student loans to credit cards would help manage your debt and pay it off, you may not be charged with fraud. Typically courts makes this decision based on the interest rate you were paying before and after the transfer and any marketing from the credit card company that encouraged you to use the card for this purpose.

If you moved your student loans to a credit account with a higher interest rate, that would be a red flag. You would be making your financial situation more challenging, and this might be evidence to the court than you had fraudulent intentions. On the other hand, if you moved them to a lower interest rate account, made payments consistently and then fell ill or lost your job, your situation is more likely to be viewed as a genuine attempt to pay off your debt. The court also examines the creditor’s actions. If a credit card company is specifically encouraging consumers to use a given card to pay off student loans, it will be very difficult for that company to sue consumers who try to discharge the account in bankruptcy.

Like we said before, this strategy could work. It’s certainly possible that you could re-shuffle your debt and file for bankruptcy without being caught by the creditor. But at what cost? Even if you are successful in this plan, you aren’t “winning.” You risk legal charges, jail time, and your credit score. There is a better way.

Thankfully, there is legitimate debt relief to help struggling consumers. The best might just be Income-Based Repayment (IBR) offered by the US Department of Education. If that doesn’t work, or if you don’t qualify, there are many creative ways to legally pay off your college loans. Here are just a few examples:

Volunteers for AmeriCorps can receive stipends to help pay off their student loan debt.
*Note that many organizations are part of the AmeriCorps network (example: Teach for America)

Those who serve in the military are also eligible for some benefits, and even some corporations help their workers pay off student debt.

Do any of these methods work for you? If not, don’t worry. There are even more student loan repayment programs that you may qualify for. Learn how student loan counseling can help decide which one is right for you all while leading you toward a healthier financial future.

A counselor can explain which options are right for you and make other personalized suggestions for your finances.